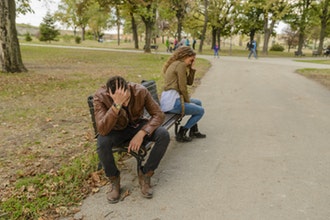 I stole this picture from a Facebook friend’s Instagram page because it resonates so much with my thoughts.

I remember during the Davido and his assurance story, when the ladies of Your View were analysing the matter, one of them said, “she has been with him through ups and downs.”

When I heard that, I was like, what the hell!

Since when is cheating part of the downs of a relationship?

Since when is being disrespected part of what we consider down? I see it as a total disregard for things that are actually the bumps relationships face!

Situations that should be considered downs are sickness, retrenchment, loss of a loved one, business issues, disappointments, betrayal from other people (not your spouse) amongst others.

These are what should be considered “downs”. Someone deliberately hurting and disrespecting you doesn’t count, not once, thrice.

Somebody had three baby mamas while dating you and suddenly, it is all okay because she got a car. It is okay, she was rewarded for being a good woman.

I honestly don’t get how we associate a good woman to her ability to either suffer or take any BS that comes with being in a relationship.

That’s how you will see them using Annie Idibia as an example of how a woman should act.

I don’t know her heart really – and I don’t like making presumptions – so I can’t say if she would have stayed with Tuface if he was a nobody or not.

But whether as a rich man or not, there is nothing worth envying or emulating about enduring disrespect and hurt.

If she wants to, fine – she alone knows what is best for her – but stop making it look like there is anything special about it that we need to emulate.

I remember one story I read here on a guy’s TL, he was talking about a good woman. Well, as usual she has to suffer.

He mentioned all the humiliation her husband put her through but she didn’t say a word, that’s what makes her a good woman.

Of course, I wasn’t surprised by the number of men who were there hailing her. What I had issues with were the women who didn’t see how sickening it is.

Nobody deemed it right to call the man’s actions evil, no, they were more concerned about a woman suffering and doing nothing. That’s what being virtuous mean.

I wish we would expend the same energy we use to make women feel that suffering is normal in a relationship to call people to commit to making their spouse happy.

I wish we spent more time telling people to live in love and we took time to actually condemn and call evil what it is.

But no, we won’t, it is not normal for a couple to be happy. One person has to suffer for it to be normal. Am I the only one who sees how twisted this is?

How many times have you seen people associating a man’s goodness based on his ability to suffer the wickedness of his wife?

How many times have you heard world people say, “such a good man, he suffered so much in the hands of the wife but he said and did nothing.

He looked on as the woman meted her wickedness. He is the real definition of a good man.” Guess what world people would do in this situation?

They would crucify the woman (which I totally don’t have issues with, I just wish it happened both ways).

Like I said, I understand if I see men saying these things because I mean, who doesn’t want to be chilling and be excused for every wrong you do? But when I see women saying it, it amazes me.

Women, who did this to us?